Breakfast is by far my favourite meal. It’s maybe the only thing I’ll get up early for in the morning. Theres not a better prospect going to bed at night, than knowing that there’s a beautiful planned breakfast awaiting you in the morning. However, on a week day working 60 plus hours, something I’m short on (as many of you probably are), is time.

I simply don’t have time to stir porridge on a stove top or whip up a batch of pancakes. Especially on only a few hours sleep after staying up late in bed scrolling through the internet (I’m sure we can all relate.)

Something I really love to make is Granola. Make a large batch to last you the week on your days off and you have one less worry for the week ahead. Weekday breakfasts needs to be quick, filling and satisfying. Bland, sugary, box cereal simply doesn’t cut it anymore.

So venture into your store cupboard, follow my recipe or pick out what you love and make it your own. Change the peanut butter for almond butter or switch out the dried cranberries and add in some cocao nibs for some chocolatey crunch. Now I’ve typed that, that sounds damn good! Definitely going to throw some of those in my next batch.

Heres to easy fulfilling breakfasts which hit the spot on a monday morning.

P.s my recipe and video use honey as part of the ingredients, but for a totally vegan granola, change the honey to another sweetener (agave syrup/coconut nectar/maple syrup.) 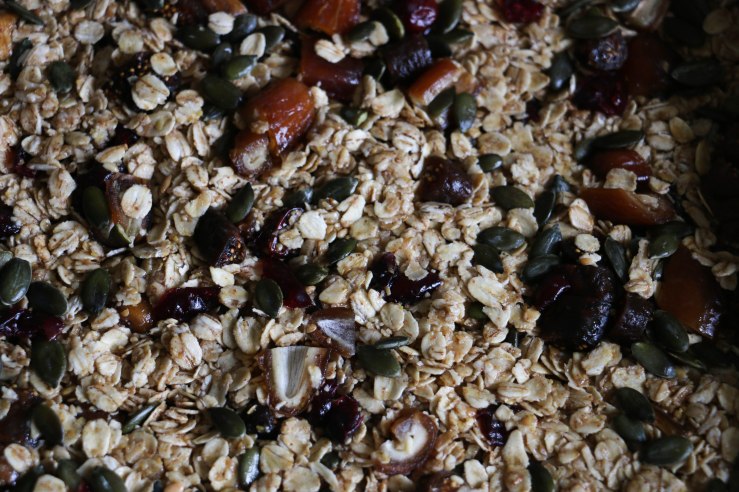 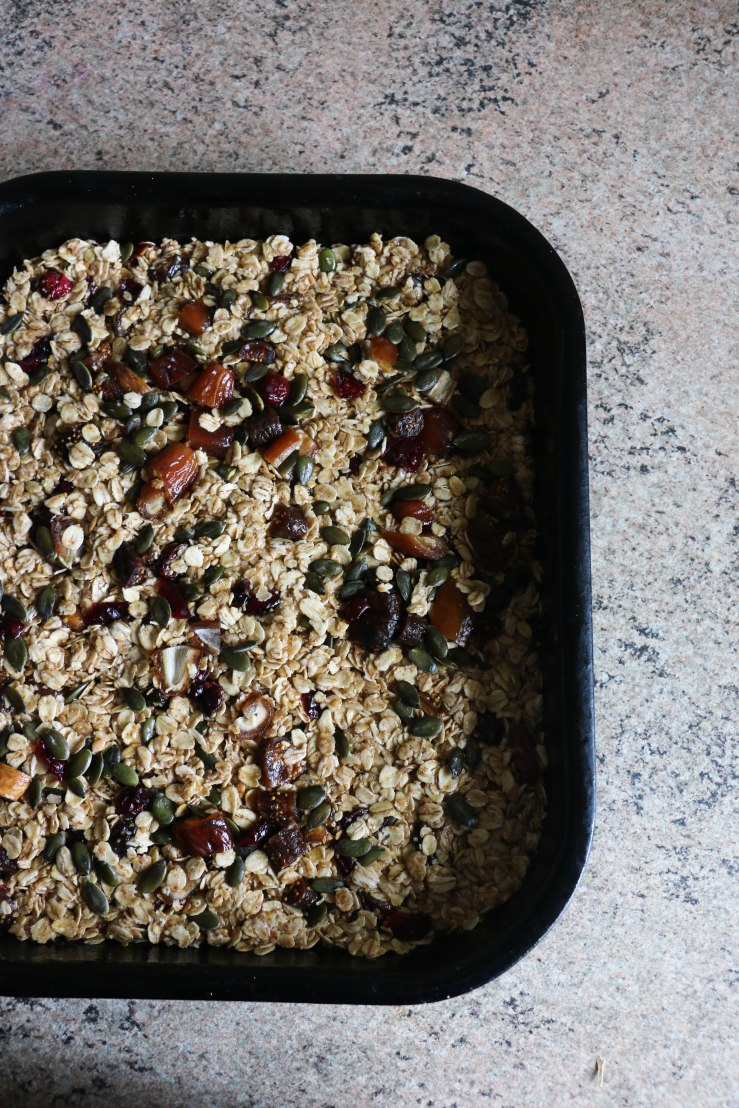 Pre-heat your oven to 180°C and grease a baking tray with olive oil.

In a small saucepan heat the honey, maple syrup, coconut oil and peanut butter on low heat until completely melted.

Next, in a large mixing bowl combine the oats, flaxseed, pumpkin seeds, dates, figs and cranberries. Pour over the warm liquid ingredients and combine well.

Pack into your prepared baking tin until flat. (This is not necessary, however if you pack your granola you’ll achieve a chunky granola that’s not too crisp, as well as keeping the dried fruit from catching while baking.)

Bake for 10-15 minutes. If you prefer a crisp granola, move the mix around a little and place back in the oven for a further 5 minutes.

Leave to cool completely and keep in an airtight container.

Pastry chef by day, rustic home baker in my spare time. Using my London kitchen to escape from the norms of everyday life.

Welcome to my little bit of foodie escapism in this big internet world of blogging.